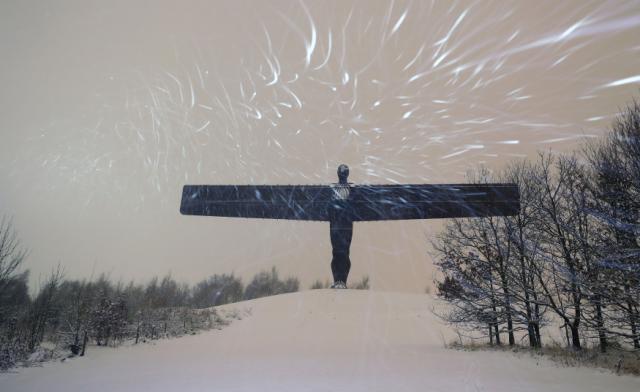 Angel of the North I Salute You

Angel of the North I Salute You

Towering over Gateshead, the Angel of the North looks over the roads and train tracks that lead to the heart of Tyneside. Owen Humphrey’s amazing photograph of our steel guardian, taken today in a blizzard, got me thinking about the raw power inherent in Antony Gormley’s landmark sculpture and how at odds this is with the commercial portrayal of our favourite celestial beings (think blond, winged sylphs in chiffon looking meaningfully up at the midnight sky, framed diamante wings…  you know the kind of thing). Our Angel of the North, now nearly 20 years old, was commissioned as a symbol of hope to a region in transition between heavy industry and the information age. Built from steel in a factory that once built ships, the Angel is my kind of celestial. It’s probably because as long as I’ve been reading tarot cards, I’ve related to angels as powerful agents of change. Here’s why.

There are three principle angels in the major arcana, and all have a dynamic role in the cards’ interpretations. (This came up for me I was writing my Ultimate Guide to Tarot, while explains all the symbols on the major and minor arcana cards.) We have:

* Archangel Raphael on VI The Lovers, who presides over a couple faced with a decision; Raphael brings love and the strength to make a decision that will impact upon our future.

* Archangel Michael on card XIV Temperance, is the alchemist of time; Michael brings protection and courage to manage what we must deal with in the present moment.

* Archangel Gabriel on card XX Judgement heralds the Day of Atonement. Gabriel awakens us to the impact of our past actions.

What also connects these three cards, for me, is the concept of time. Time to make a decision, time to get the formula right, time to sharpen our awareness, to become fully conscious of our role here on earth.

It might also be time for that blizzard to let up, though… 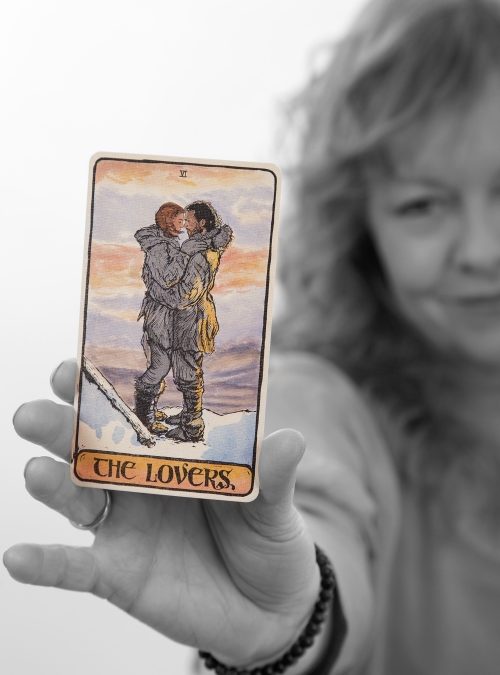 Why I Love Game of Thrones Tarot LOVERS 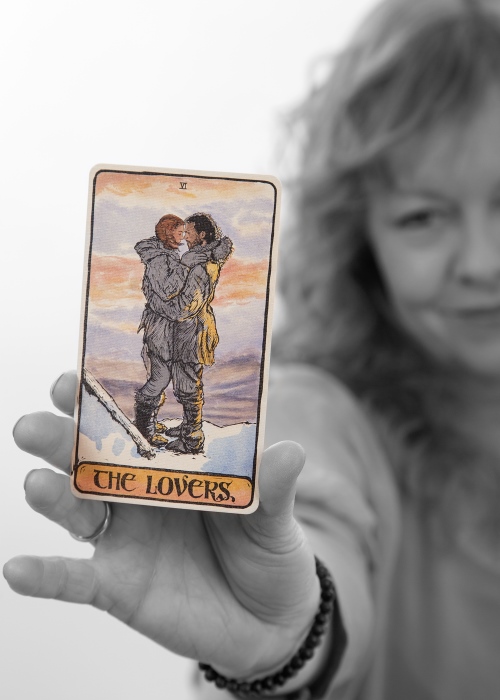 Why I Love Game of Thrones Tarot LOVERS

Today, when a US journalist asked, ‘What’s your favourite card in the whole Game of Thrones tarot deck?’ I was momentarily stumped. ‘Favourite’ has a load of connotations for me, as in which baby out of all the cards is best. I can’t answer that one. When I switched the question to ‘Which do I feel most passionate about?’ there is a card that, for me, pulls at the heartstrings. One could even call it ‘uplifting’ (yes, there is a heart-warming moment amidst the chaos of beheadings, betrayals, and blood…): it’s card VI, The Lovers, which depicts Jon Snow and fire-kissed Wildling Ygritte atop the Wall (Kit Harington and Rose Leslie). After a hair-raising, perilous climb that almost kills them both, the sun illuminates a truly magical vista. As Ygritte says, “I’ve waited my whole life to see the world from up there.” They kiss, grateful for their survival and for each other. This scene just had to be our chosen scene for Game of Thrones Tarot Lovers.

The kiss depicted so beautifully by artist Craig Coss on the GoT tarot Lovers card captures a timeless moment when love is perfect. We know their time together is precious which, for me, makes the card all the more evocative. As tarotistas will know, the Lovers card also begs a decision. Jon and Ygritte may be together now, but tribal allegiances divide them – and eventually tear them apart.

After Craig painted the card came the press announcement in September 2017 that Jon and Ygritte were engaged, and lovers in real life. In fact, there’s some talk that doing those scenes on the Wall led to Kit Harington falling in love with Rose Leslie. They kept their relationship under wraps for four years, so they were, secretly, lovers all along…

Now that, indeed, was a good prediction. 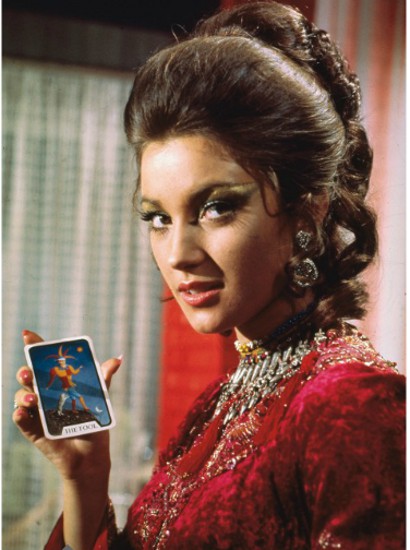 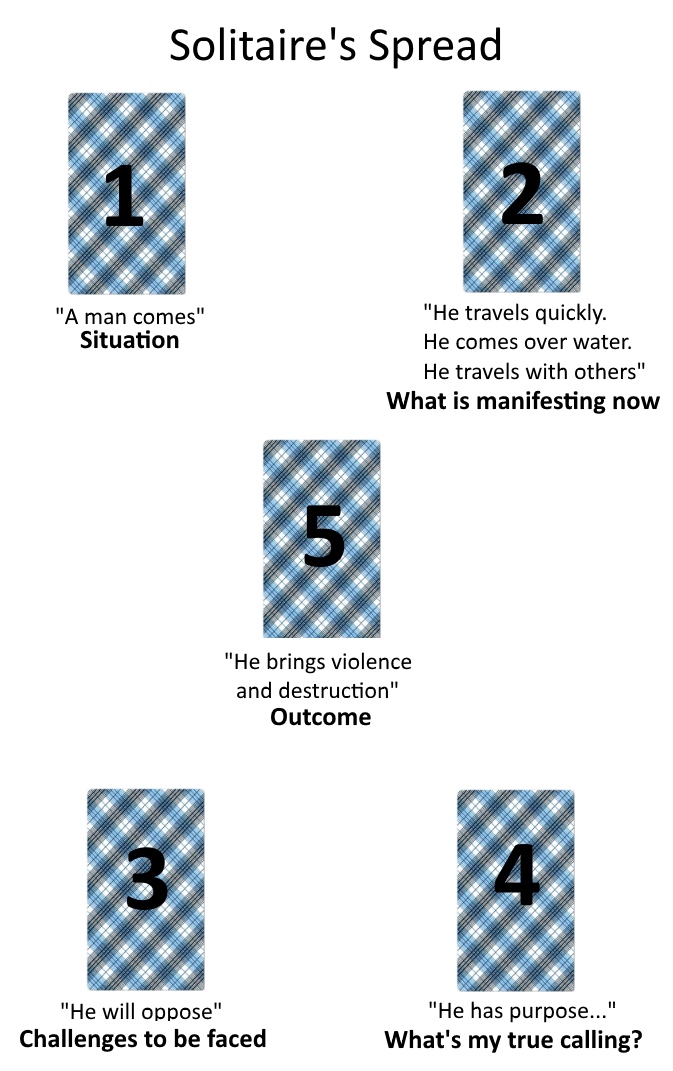 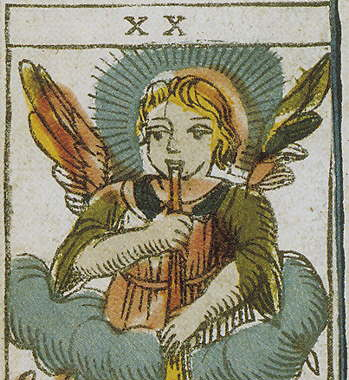 Today we have a sea fret! Since moving to the north-east coast three months ago, I’ve heard dark mutterings of ‘frets’ – thick, spooky fog that comes right off the water and gets you imagining bad-tempered sea gods and the like. The Fret’s a padlock right around the house that’s keeping me at my desk. And write. No pottering around or popping up to Juliet’s, our favourite bakery on Sea Road, for home-made caramel shortbread. No, says the Fret, You Must Finish Tarot Switchwords.

It’s one of those projects I’ve been tinkering with for a year. Start, stop (now, stopping was for very good reason. I got The Call – the one asking me to write and co-create HBO’s Game of Thrones Tarot. But that’s another story.)

So, until at least the Fret lifts, I’m on the case. Road-testing the spreads showing how to get a Switchword, or manifesting mantra. Rewriting what I thought was great twelve months ago and now wondering what on earth I was doing. I’m in Judgement phase: the card that asks you to revisit the past, edit, audit, let go of mistakes, then move on up.

This Marseilles Judgement card says it – the call to reawaken to what needs attention.

Wish me luck. I’m here until I can see the sea gulls worm-dancing in the garden again… 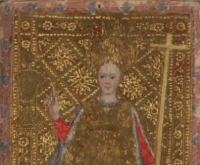 Discovering the Origins of the Tarot: Saturnalia 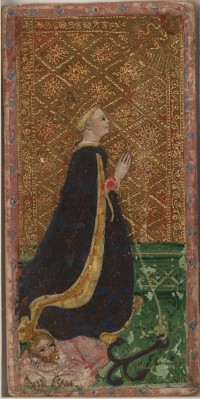 The Tarot’s ‘characters probably evolved from the Roman festival of Saturnalia, which took place around Christmas time each year.  This is also the principal theory of the often-quoted librarian and Tarot researcher Gertrude Moakley who in 1966 published The Tarot Cards Painted by Bonifacio Bembo for the Visconti-Sforza Family (who painted the cards, however, is another subject in itself).

According to Moakley, during the Roman Saturnalia festival, slave and master became equal, and the people in Italian cities celebrated by dressing up in costumes and masks. The festival consisted of a lavish procession of ‘triumphs’ in chariots –  actors dressed as major arcana characters – culminating in the ritual murder of the Carnival King, or Bagatino. The source we have for this is Petrach’s poem I Trionfi, or ‘The Triumphs’ of 1354, which predates the earliest tarot cards. In it he describes how the procession told a story of ‘triumphs’, as follows, beginning with:

1 The Lovers, followed by:

2 Chastity (Temperance), which triumphs over the Lovers, or love; followed by:

3 Death, which triumphs over Chastity. Then came:

5 Time (The Hermit), which triumphs over Fame. (In fact, the earlier tarot cards show the Hermit with an hourglass to represent time, which later became a lantern in the Rider Waite Smith deck). Then finally comes:

6 Eternity (The World), which triumphs over Time.

In the Duke of Milan’s day, many years later, the carnival would have included more tarot characters: Justice, The Hanged Man and the cosmic cards, The Sun, The Moon and The Star. The crowd would have laughed at the obvious sexual reference of Temperance with her cups and Strength, shown as a man with a phallic club. Other cards that may have been part of the procession because they appeared in the early decks have been abandoned, however, as tarot continued its 600-year journey: Faith, Hope and Charity. These ‘lost’ cards made sense in the original decks, as they fit perfectly with the other ‘virtue’ cards of the major arcana: Temperance, Strength and Justice.

Faith  Her signifiers are a cross, for her faith, and a chalice, symbolising the vessel of Christ.

Hope Her signifier is an anchor, the sailor’s symbol of safe return from peril.

Charity Her signifier is a pelican, for generosity and the family.

These three cards’ meanings appear to have been absorbed into other cards:

Charity: Temperance and the High Priestess. This may not be obvious, as the image shows her with a child more in keeping with The Empress. However, in Catholic catechism charity is aligned with Chastity (more the virginal nun, or High Priestess) and the virtue of Temperance.

Images below are from the Cary-Yale Tarot Deck