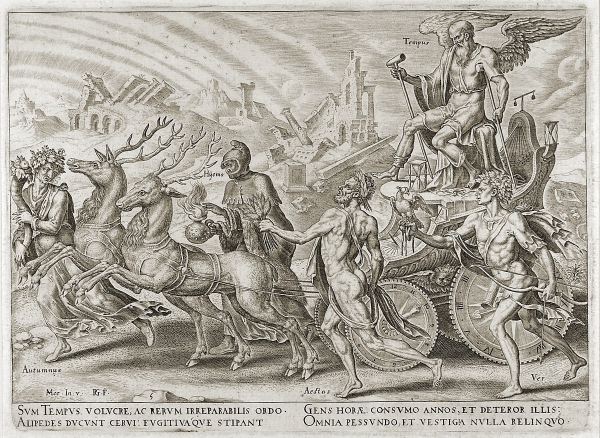 Now before you think I’m about to delve into Doreen Virtue’s conversion (see Lisa Frideborg Eddy’s excellent blog for this), here I’m talking about the tarot virtue cards: Strength, Justice and Temperance.

Given that the major arcana cards were not originally numbered – this came later – I wondered what would happen if the deck’s three surviving virtue cards vanished, just for a moment and then how the remaining cards might reconnect. Would there be another story?

Why, you might say. Why oh why, Liz. Well, while researching the Hermit, I found myself pouring over the symbols in a fifteenth-century engraving, The Triumph of Time (above), inspired by Petrarch’s lyric sequence poem Trionfi. (It’s the kind of thing I’m drawn to when I have a cup of builder’s tea in one hand and a Jaffa cake in the other.) Anyhow: in this image, one of the predecessors of the tarot Hermit, I recognised a number of symbols pertinent to other major arcana cards. First up, the chariot of our Hermit, or Father Time, is redolent of card VII, the Chariot. Artists inspired by Trionfi included triumphal chariots for all six paintings in the sequence, but the connection for me is the sense of force and determination: more Chariot, less Hermit. The chariot’s wheels are clock faces, which suggest the Wheel of Fortune, the next card. Father time’s chariot is speeding along – as does time, symbolised by the hourglass. His crutches represent infirmity and his wings, the onset of ascension. These original symbols in van Heemskerck’s illustration seems to embody both the Chariot and the Wheel of Fortune. Time, like fate, is beyond our control. It moves quickly, a chariot chasing after our egos, or quest for Fame. With Strength vanished, we get the Chariot, the Hermit and the Wheel as a trifold lesson on time.

Drop Justice, and we have The Wheel of Fortune followed by the Hanged Man and Death. This makes a kind of narrative sense: life deals us what it will – we enter the world between worlds (the Hanged Man), and if really unlucky, we die. (If we see Death as the Black Death of the Middle Ages, Death’s Danse Macabre would have felt literal rather than symbolic). Without Justice, Death feels even less discriminating. There is no human intervention, or judge to pass sentence – no orderly process of assessment. There is simply Fate, a hanging, then a dying. But what if we see the Hanged Man as a response to the Wheel? Again, without Justice, the arbitrator, there’s no go-between, nothing telling us how to respond to or interpret the world – we must be guided by our own knowing. The Hanged Man exists on the earth plane, but he is in a spiritual bliss-state, beatific, glowing. When exposed to the vagaries of Fate and the universe, which has ultimate power over us, we are changed by the experience. The Death that follows, then, is the death of the ego.

Drop Temperance, and we get Death followed by the Devil and the Tower – the unholy trinity of change, bondage and chaos. With no angel of Temperance between the Devil and the Tower, we hurtle straight from temptation, addiction, entrapment or lust into an almighty calamity, which eventually brings a release. (There’s more to say on this, of course – see The Ultimate Guide to Tarot, which dives deep into the symbols of these wise, dark cards…)

Without the virtues of Strength, Justice and Temperance, there’s no reckoning; no pause in which to find order or assimilate our experiences. With these cards in the deck, we are called upon to seek the higher ground, the higher self; to find a greater authority either within ourselves (Strength, Temperance), or externally (Justice). The moral lesson, then? Perhaps, that we can intervene in our own stories and respond accordingly – whatever happens.

There’s also virtue in exploring the ‘lost’ virtues of the tarot, too, if you’re interested: once, there was Prudence (absorbed into the Hermit, Justice or/and The Hanged Man); and Faith, Hope and Charity. Faith may have made her way into The High Priestess; and Hope most likely into The Star. My theory on Charity is that she surfaces as Temperance by way of Chastity – but that’s another story, coming up in Understanding Tarot.

Thanks for reading, tarotistas… til next time.