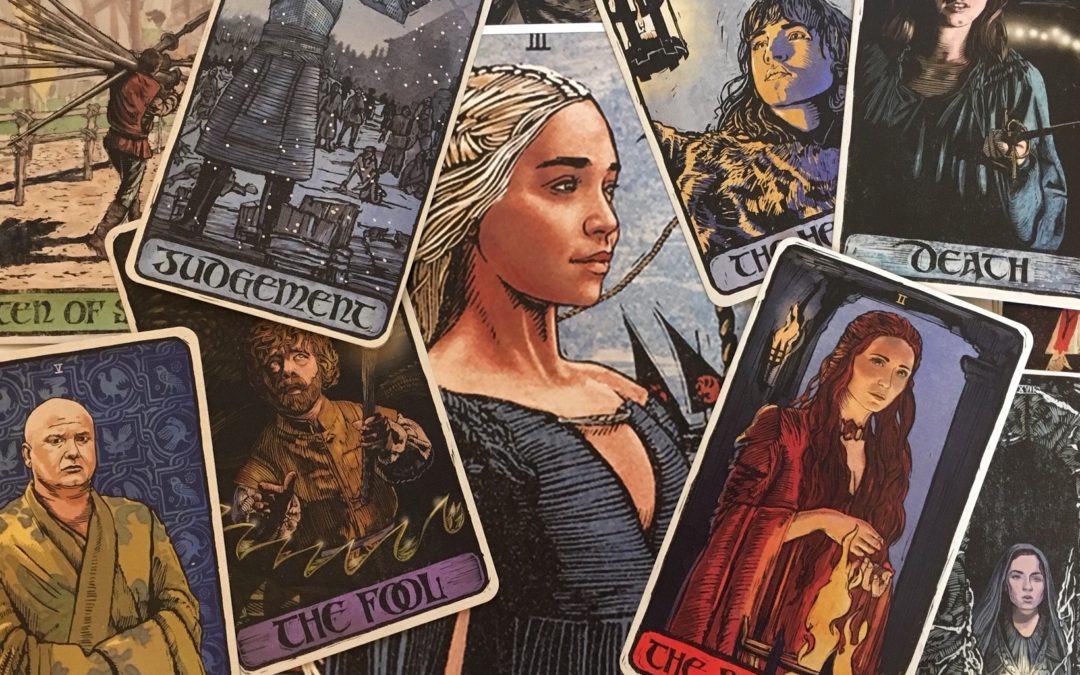 It’s taken me many moons to process the mid-to-final episodes of Game of Thrones. Back in early May, I was teaching tarot in Australia when that cinematic masterpiece, ‘The Long Night’ aired; we’d rented a beachside studio in Perth, brought along a projector and, perched at the one table, angled its lens toward a thankfully white wall. Lights out, jet lagged and edgy with anticipation, we plummeted into Winterfell battle-fear. Samwell Tarley, fingers shaking; Melisandre igniting the blades of the Dothraki horde; Arya’s death-blow to the Night King. And afterwards, I thought I’d just continue to write about it. Then came the block: having seen the remainder of the series by the end of the trip, I could no longer review on an episode by episode basis. And there was a lot to process. Compare ‘The Long Night’ to the series finale, and it’s if we’re seeing a different Thrones: one, telling multiple hero’s journeys; and another, which wraps up a complex narrative by misaligning character and action. My Game of Thrones Tarot partner in crime, the artist Craig Coss, expressed this misalignment as being ‘archetypal untrue to character’.

There are many archetypal truths in ‘The Long Night’. Arya kills the Night King – true to her role as assassin, true to her quest for justice for her family (she’s defending Bran, after all). In cards, then, we have Death (Arya Stark), The Night King (Judgement) and Bran (the Hermit). These three express key stages of the soul’s journey toward spiritual ascension – the search for truth (Hermit) the death of the ego (Death) and the healing of the past (Judgement). In the crypts of Winterfell we have, amongst others Tyrion, Sansa and Varys, the diplomats literally in the dark. This resonates with me as a motif for the whole episode – the story comes from the place of the soul enacted through the body, which cannot be other than true. The intellect is buried, quiet in the crypts, while the soul fights for survival in combat. There’s even a consistency with Melisandre, that paragon of moral ambiguity – when Beric Dondarrion (finally) dies protecting Arya Stark, Melisandre tells Arya, ‘The Lord brought him back for a purpose. And now that purpose has been served.’ She acknowledges her own time to go when after the battle she removes her red necklace, saying, ‘My work is done’ as she ages and falls to dust. While Melisandre has her own card in our deck (The Priestess) I like to see Beric as the Ten of Wands – being brought back to life time and again without understanding why – until he dies saving Arya, who can in turn vanquish the Night King and save the living. As with the tarot meaning of the Ten, he has no perspective on his purpose, weighed down as he is by the burden of service.

When we look at the last episodes of Game of Thrones, I struggle to square the circle. We’re given hints that Varys may be having Dany poisoned and, given Dany’s family history of madness, this would be an acceptable plot development – the poisoning induces madness, likening Dany to her ancestor Mad King Aerys – leaving a clear path for Jon to take the throne. But this doesn’t materialise. We’re expected to believe that power alone has corrupted the queen who once wanted to break the wheel of slavery, turning her into a virtual tyrant who destroys the innocents of King’s Landing. And naturally I felt cheated of a Dany/Cersei showdown: too easy for her to die under the rubble with Jaime; and then, there’s the Brienne situation. Virgin queens are legendary. Why did the writers deem it necessary for Brienne to sleep with Jaime, then be cast as weeping widow-to-be, waving him off into the night, now a ‘whole’ woman? What did work for me, however, was the destruction of the iron throne and Bran becoming King: the wheelchair replacing the throne, hopefully heralding an era of enlightenment.

When I look at the numerology of the cards that represent the characters in the crypt, I get the gender of the next ruler. In the crypts are Varys (V the Hierophant) Sansa (XVII the Star) and Tyrion ( the Fool). Add 5 + 17 + 0 = 22. Reduce (2 + 2) to give four, the number of the tarot Emperor. Now to the numbers of cards representing key characters involved in the final confrontation with the Night King – Theon, Arya, Bran and the Night King himself – and we get the Hanged Man, Death, the Hermit and Judgement (9 + 12 + 13+ 20 = 54). Add 5 + 4 = 9 which returns us to Bran, IX the Hermit, the quintessence, and the final ruler of Westeros.