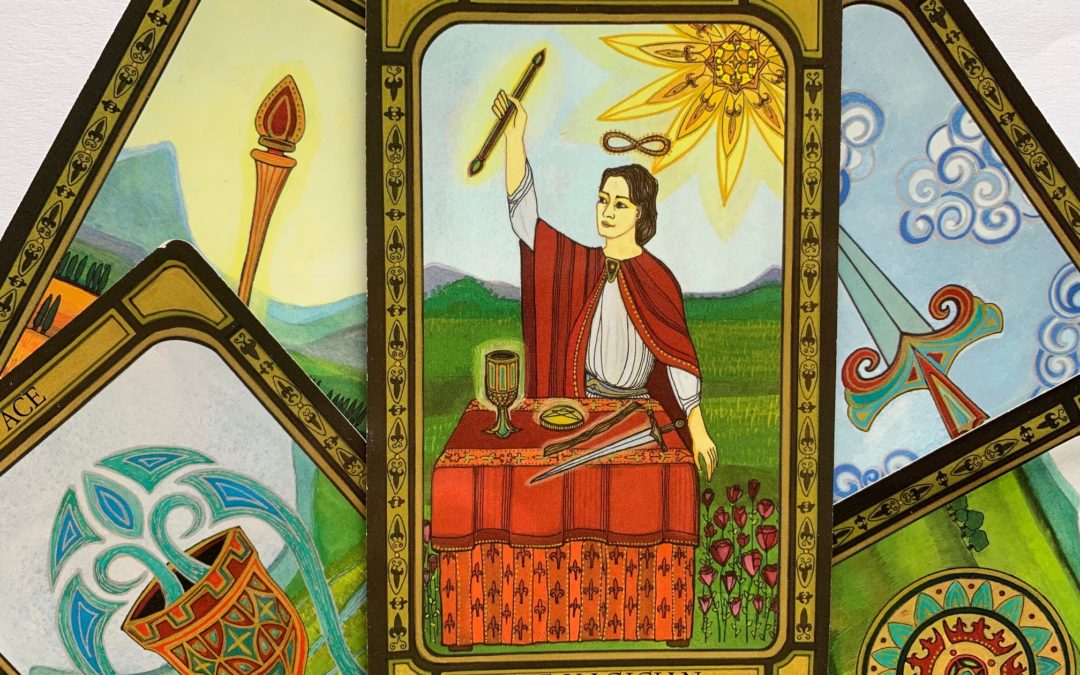 When writing The Ultimate Guide to Tarot, I included in each major arcana profile a subheading, ‘Reflections’ – a list of minor arcana cards that echo the meaning of the major: Death’s reflection in the Ten of Swords. The Devil in the Eight of Swords (you get the picture). Then I began looking for patterns (I’m hard-wired to do this after thirty-plus years as a tarot reader. Of course, ahem, I started reading when I was five ten okay, 21).

When exploring alignments, I got to investigate some alternative relationships between cards. For example, the link between the Devil and the Eight of Swords may be obvious (restriction), but going deeper, I felt the Fives tell us much more; Fives can explain why you end up in a Devil situation. So, here’s my list:

I The Magician: The Aces

III The Empress: The Queens

IV The Emperor: The Kings

XXI The World: The Sixes

The High Priestess, Hierophant, Hermit, Tower, Star, and Moon are not aligned with minor groups. (The Fool, as outside the major arcana sequence, is not included.) Given the minors often reveal the detail of day-to-day concerns, perhaps my inability to align minors to these six cards isn’t surprising; after all, the High Priestess, Hierophant and Hermit operate beyond the visible in realms unseen. The Tower, Star, and Moon evoke the liminal, too – the blackness of the Tower’s landscape and the twilight worlds of the Star and Moon reveal the consequence of undercurrents in our lives, rather than what is manifest in the light of day.

Looking at how the groupings fall has helped me consider, more broadly, some of the minor arcana cards’ meanings. I’m skipping the explanations of some alignments here, as they’re obvious: how the Aces fall under the Magician (initiation, beginnings, pure essence – the alchemic territory of the Magician); and the Queens and Kings, overseen by the Empress and Emperor, with each Court card an aspect of the major archetype. Then, Tarotistas, come the others, below, along with my connections (aided by my trusty tea and cake):

The Twos represent the choice aspect of the Lovers: the need for a mature decision. Rather than leap off the cliff in a spontaneous surfeit of joy, Fool-style, it’s time to consider long-term options. The figures on the RWS Twos are largely static, suggesting the process of consideration over time – which may be procrastination (Swords) planning (Wands), flipping alternatives (Pentacles) or the long gaze into the eyes of the beloved (Cups). And of course, the Two of Cups evokes the literal love meaning of the Lovers in readings, and the Lovers in its composition, with the lion (symbol of passion and protection) replacing Archangel Raphael as the guiding force appearing above the couple.

VII The Chariot: The Knights – forging ahead

As the Kings and Queens are four aspects of the Emperor and Empress, with the Knights we see four faces of the charioteer (pragmatist, idealist, egotist, dreamer). The purpose of the journey might be revealed by the Knights – financial stability and work (Knight of Pentacles); a love quest (Knight of Cups); to battle (Knight of Swords) or for adventure (Knight of Wands). The Knight of Wands is the unfailing symbol of moving house, in many readings – just as the charioteer departs the city, onward.

X The Wheel of Fortune: The Nines – intense times

By card nine in three minor arcana suits, we may just have convinced ourselves we’re in control. Nines are cards of accumulation and, therefore, intensity. Before the revelation of the Tens, we reach peak performance, able to manifest the ideal reality with the Nine of Cups or enjoy the material security of the Nine of Pentacles. The Nine of Wands could be framed as ultimate defence, as we protect our past achievements (and wounds); while the Nine of Swords takes us into the shadow self with its hyper-anxiety – the conflictual suit of Swords internalised in extremis. As anxiety can arise from having no control over external situations, the Nine of Swords is a harbinger of the Wheel of Fortune. The Wheel tells us what the Nine of Swords knew all along: control is an illusion, and there are greater forces at work over which we have little influence.

It’s the public nature of some of these Threes that lead me to Justice. Three women dancing in a garden (Cups); a craftsman holding court in a church, standing on a bench; and a journeyman atop a hill, standing tall with three wands, glimpsing the potential of the territory ahead. Looking at these cards, it’s as if we’re almost part of the picture, at the edge of the party, or talk, or just a footstep or two behind the traveller. As I reader, I feel cast into the role of observer – or Judge. There’s an element of assessment going on within the cards (what’s the traveller thinking, as he scopes out the landscape? What’s the verdict on the craftsman’s ideas, after he steps down from the bench?) Even the Three of Cups’ women might be celebrating the outcome of a trial, whether legal or personal.

The Threes also resonate with Judgement as, looking at these cards in sequence, they represent the highs and lows of the phase we’re reflecting on before moving toward the completion of The World. As Threes, they often represent physical events (the number Three is dynamic, symbolising tangible results). Threes also carry an emotional charge – the good times (Cups), the trips (Wands), the achievements (Pentacles) – and the sorrows (the Three of Swords, naturally). And it’s these experiences we need to revisit and assess; to decide which memories and lessons to take forward, and which to leave behind.

An alternative alignment for Three is The Empress.

XII The Hanged Man: The Fours – states and retreat

As the number of stability, Four evokes the stillness of card XII. The Four of Cups’ dejected figure might be the Hanged Man before his spiritual initiation; without trust in the flow of life, he is unable to move forward. The Four of Swords and Four of Pentacles are equally static, occurring as statues – the knight in his church, the merchant in the town square. The Four of Pentacles denotes the Hanged Man’s absolute security, while the Four of Swords signifies rest; there is nothing to change other than one’s perspective. The spirited Wands’ joyful couple are to put down roots in their ideal location, bringing their element of Fire down to earth, and it’s this Four of Wands that most expresses the bliss of the Hanged Man’s suspension, symbolised by his halo and beatific smile.

XIII Death: The Tens – all the endings

After the completion of the cycles experienced in the Tens, Death, or change, must come. What has amassed in the Nines now manifests: endings (Ten of Swords), fulfilment (Cups), consolidation and unification (Pentacles) or impossible burdens (Wands). If positive (Pentacles and Cups), the lesson may be to appreciate what we have and to continue to feed relationships and creative projects with our energy. If negative (Wands and Swords), Death releases us from self-enquiry. There’s clarity and truth; the bones don’t lie.

XIV Temperance: The Sevens – a struggle for balance

Take a measured approach, says Temperance, and you can make it work. Sound advice for the Sevens, of course, to not give in before the finish line – even if your competitor is stealing from you (Seven of Swords) or you’re tired of fire-fighting (Wands). Rise to the challenge, be ingenious and so what Temperance does – pay attention to every detail and don’t waste a drop of your energy on what isn’t important. And don’t rest for too long (Pentacles). Oh, the fantastical delusions of the Seven of Cups: don’t give in to those, either. Just do the work (note to self). So, in this sense, Temperance, as archangel Michael, is the guiding light when the work of the Seven threatens to derail our hopes. Anything is (still) possible.

If ever there were a gateway drug to the Devil, it would come packaged as a Five. Sorrow and bereavement (Cups), tests (Wands), humiliation (Swords) or isolation and poverty (Pentacles). How we manage the Fives leads to the darkness of devil-ment or the choice offered by the Lovers. We either lose ourselves, or choose for ourselves. The Fives, in this way, denote challenges that if left untended can lead us into temptation.

Looking at the RWS card as a container of Pages, we might consider that the Page of Wands is the gardener (gardening as the work of the soul). The Page of Pentacles built the wall (the material world); the Page of Swords defends it, while the Page of Cups brings the Sun’s joy. As the RWS and Marseilles Sun cards depict children, this fits the Page profile – a child or youth. In Jungian terms, the child of the Sun can be regarded as the archetype of the Divine Child; Jung says this archetype means ‘the completion of a long path’. As card XIX in the major arcana sequence, the positioning of the Sun comes towards the end of the hero’s journey that the major arcana cycle may be said to represent.

XXI The World: The Sixes – microcosms of completion

Six is the number of harmony. To me, the tarot sixes are all microcosms of completion. They illustrate some kind of transaction – for example: the Six of Pentacles depicts a donation; the Six of Wands, a victory procession; the Six of Cups,

These Sixes also depict groups outdoors – even the Two of Cups has a third person, centre-left – and the actions takes place outside. In this sense, the Sixes illustrate public displays of completion that XXI World, in its expansiveness, represents.