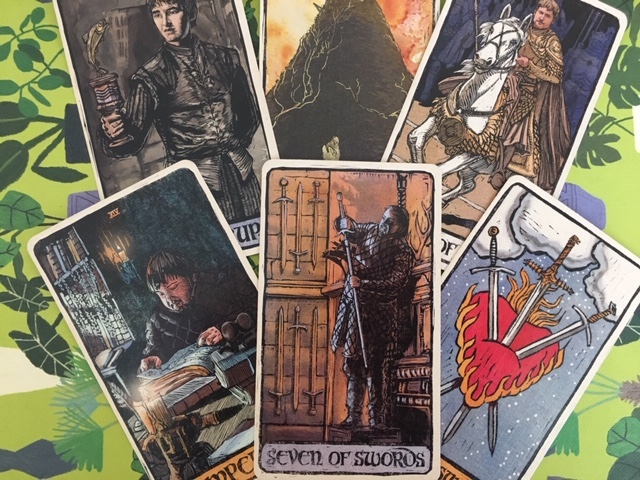 Before tonight’s next instalment of our favourite epic, here’s a recap of some of the storylines, told via our Game of Thrones Tarot.

Bran and Jaime: Page of Cups, The Tower, Knight of Wands. Bran and Jaime’s first eye contact since Bran discovered the truth about Jaime and Cersei in the decrepit tower at Winterfell. Bran as the Page of Cups, before being pushed from the tower by Jaimie; the Tower, the infrastructure of lies, about to crumble; and now the return of Jaime, Knight of Wands. The look between Bran and Jaime takes us right back to Season 1. And yet, Bran in the deck is also the Hermit – now the evolved visionary, the Three-Eyed Raven. (I talk in-depth about the Hermit as the wounded healer in my upcoming workshops in Perth, Melbourne and Sydney…)

Samwell and Dany: Temperance, Seven of Swords, Three of Swords. Samwell as Temperance, as the seeker of the higher path, searching ancient texts for information on dragon glass to defeat the Night King. The Seven of Swords depicts the moment Samwell steals Hartsbane, the family heirloom, which he admits to Dany before her revelation that his father and brother were killed at her behest. The result: the painful truth of the Three of Swords. The sorrowful Three also reigns during Sam and Jon’s subsequent conversation, initiated by Bran: Jon learns the truth of his birth, his familial relationship with Dany, and that he is the rightful heir to the Iron Throne.

Jon Snow and Lyanna Mormont: King of Cups, The Empress, Ten of Swords. Bending the knee to Dany has our favourite young leader, Lyanna Mormont, questioning Jon’s commitment to the North. Jon sees Dany’s way as the only productive way forward (Empress) if they are to defeat the Night King (Judgement). Will he be made out a traitor once again? (Ten of Swords). In the deck, it’s worth noting that we have Jon as both King of Cups (King in the North, when the deck went to press) and the Emperor. The truth is out that Jon is a Targaryen, and he sits in our deck alongside Dany, Emperor and Empress together. Will that happen, I wonder? Or will Jon – or Dany – take the Iron Throne alone?