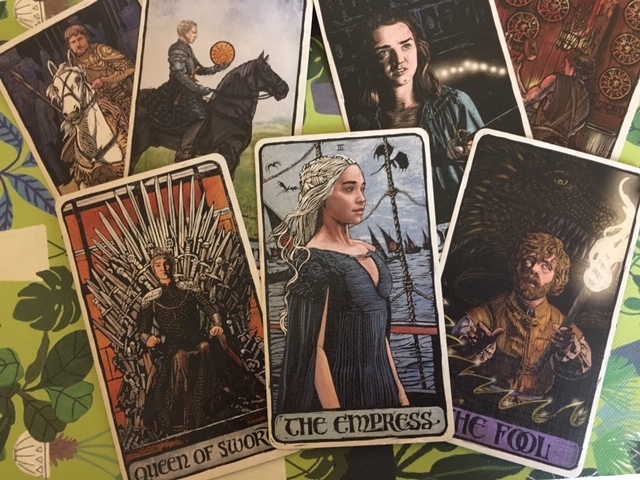 Episode 2 – what a battle warm-up! Here’s a recap of some of the storylines, told via our Game of Thrones Tarot.

‘Arise, Ser Brienne’. As GoT Tarot artist Craig Coss says, ‘We always knew she was a knight.’ Here’s how Craig depicted Brienne as Knight of Coins: loyal, steadfast to the last. And then Jaime pledges to fight for the living under her leadership. This Lannister has undergone one of the deepest transformations throughout this epic narrative, from antagonist to protector, saving Brienne from attack by brigands and the bear-pit. His arrogance gone, he now comes to some understanding with Bran when they talk at the Godswood – and makes his priorities clear.

Arya and Gendry: Arya discovers Gendry’s take on the White Walkers, whom he describes simply as ‘Death’. And Arya, as our Death card, knows exactly what that’s about. Now she has a handcrafted weapon from Gendry, will she survive the coming battle? In the hours before the beginning of war, she decides it’s time to experience intimacy. Arya and Gendry might be the new Lovers: Our GoT card depicts Jon and Ygritte atop the wall, also on the cusp of death or survival.

Cersei’s Fools: Dany has brought her Unsullied army and dragons (The Chariot) to Winterfell to fight, yet Cersei, Queen of Swords, has tricked them all: she sends no one to the North, intending to murder those who survive the battle with the Night King (she’s surely an aspect of the Devil card at this point in the narrative, depicted in our deck as Ramsay Bolton). And yet Tyrion, known for his intelligence and wisdom, advised Dany that his sister could be trusted. Cersei has fooled even Tyrion – who has been our Fool in the deck all along.