Shadow Messages: The Magpie Rhyme and the Minor Arcana 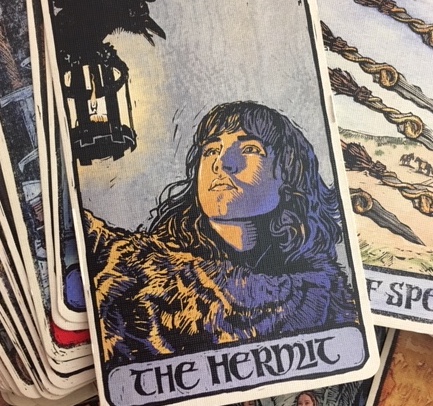 In Game of Thrones, Bran Stark sees the Three-Eyed Raven in a vision-dream, which leads him to discover his future identity; visitations from the Raven trigger revelations of the past, present and future. The bird as cosmic messenger goes back to ancient Roman and Greek augury, and its folklore equivalent, today, is the magpie counting song. Remember the ditty – One for sorrow, two for joy; three for a girl, four for a boy?

Over the years, other corvidae made their way in to the Magpie Rhyme – jackdaws, crows – and ravens. Musing on this, as you do, I came across a nineteenth-century variant and as soon as I read it, jaffa cake in hand, I saw connections with the tarot’s minor arcana. One raven (or magpie) for the Aces, two for the Twos, and so on.

One for sorrow,
Two for luck; (or mirth)
Three for a wedding,
Four for death; (or birth)
Five for silver,
Six for gold;
Seven for a secret,
Not to be told;
Eight for heaven,
Nine for hell
And ten for the devil’s own sell!

Proverbs and Popular Saying of the Seasons, M A Denham (London, 1846)

So, the Aces are sorrow, are they? No! They’re all positive! I hear you protest. I baulked at this, too – unless we’re looking purely at shadow, or reversed meanings, here. But bear with.

If we take each line of the rhyme as a question, perhaps we’ll find a way to integrate the shadow and reversed interpretations; to investigate a card rather than see its meaning as fixed (my Masters of Tarot workshop at The Omega Institute in New York State last summer took a deep dive into card symbols as live entities – do check out Omega for the great 2019 speakers).

Back to the ravens, our minor arcana messengers. As for those positive lines of the rhyme, we get to put in an additional layer of interpretation. I’ve been reading cards and writing about tarot for over thirty years now, and need to stay woke, as they say – to know when I’m pulling back into those ingrained card meanings I absorbed from tarot books aged nineteen, joss sticks a-burning in my bedroom.

So, here’s how the minor arcana story might evolve with our Magpie Rhyme.

The Aces: One for sorrow
Where’s the sorrow? Is there a defeat concealed within the victory of each upright Ace? If we take the Aces’ reversed meanings, we’re immediately immersed in their shadow aspects of failure – and resulting sorrow. But given I’m not looking at polarised interpretations here, how about merging the upright and reversed meanings, and consider: Did this victory require a sacrifice? Was this worthwhile?T

The Twos: Two for luck (or mirth)
Where’s the uplift in the Twos? Perhaps there’s advice here on dealing with the stalemate of the Two of Swords – to not take it all so seriously, to take a Fool’s leap. The Two of Cups is naturally positive in its upright position as the forerunner of the celebratory Three. The Two of Wands is all planning, preparing for action and decisions, while the Two of Pentacles is decision pending – for both, we might need a bit of luck to send us in the right direction. And add in that it is possible to feel joy, or mirth, at the possibilities the future can hold brings an energy into the Twos which might otherwise feel static.T

The Threes: Three for a wedding
So here’s the first natural alignment, with the Three of Cups. Three merrymakers, toasting. They might be at a wedding, or party, but life, at this moment, is good. The wedding theme also brings to mind early Lovers cards (Etteila’s man, woman, and priest) and Marseilles cards which showed a third person with a couple, indicating choice and possibly affairs. The three in the Three of Swords can be seen as the shadow side of love, with its attendant heartbreak, but what if this card is also an invitation to see truth and commit to ourselves? For the Three of Wands and Pentacles, we’re in action – creating, travelling, forming alliances. Action requires commitment; nothing happens without it, and if we take a wedding as the ultimate symbolic commitment, then we see guidance, here, on how to maximise opportunities.T

The Fours: Four for a death (or birth)
As Denham couldn’t be sure of the meaning here, it’s likely he was quoting two versions of the rhyme, tying them together in one neat contradiction. But keeping in mind the Fool and the World, with beginnings and endings intertwined, we might ask of the Fours: What needs to die so that something else can be born? With the Four of Swords and Cups, it’s breaking an impasse. With the Four of Wands, we’re in a temporary paradise before the tests of the Five (very Lovers). With the Four of Pentacles, the fourth line of the rhyme might be advice: don’t hold too fast to what you have. Change is coming.T

The Fives: Five for silver
Silver being not quite good enough. It’s not gold, after all. The Five of Cups urges us to look at what we still have after suffering loss, as does the Five of Pentacles. Silver also reeks of betrayal, that Judas-silver, and the humiliation we see in the Five of Swords. In the Five of Wands, we might ask ourselves: is this test/opposition/ego situation worth my energy? Am I fighting to be second-best? Silver is also associated with the Moon – with psychic knowing, twilight states and soul-searching. With the Fives of Pentacles, Cups and Swords, we might ask ourselves, ‘How has it come to this? Then, ‘What intuitively is my next step?’

The Sixes: Six for gold
In the Six of Pentacles, we literally have it – generosity and compassion. Then, there are the golden years remembered in the Six of Cups, as nostalgia and the return of the past. The gold within the Six of Swords may represent the best we can give ourselves as we move away from conflict: the gift of peace. And the Six of Wands, as a victory card, talks of a golden reputation, when efforts are publicly acknowledged: on our Game of Thrones Tarot card, we see Daenerys Targaryen riding out from Astapor with the freed Unsullied slave-warriors. As a question, line six of the rhyme could be, ‘What’s worth fighting for? What’s at stake, and what do I value?’

The Sevens: Seven for a secret
Ah, the mysteries: perfect for the Seven of Cups. And so too for the Seven of Swords – theft, underhandedness, or perhaps lateral thinking: a strategy that must be kept under wraps. For the Seven of Wands, we have hard work; anticipating problems, defending values. There’s an immediacy to this card that I like: it has aim, and represents the groundwork needed before a project can fly, depicted in the flying wands of the Eight. With the seventh line of the rhyme in mind we might ask, ‘What’s the secret ingredient? What’s the hidden advantage in this situation? For the Seven of Pentacles, there’s a similar theme, as we see a gardener contemplating his crop. Add secrets and mysteries to the interpretation, and we see that the gardener is at a more critical point than he might realise. The first phase is complete, and he may be satisfied with this, but there’s also the realisation that he needs a strategy. Can he grow more? Can he be even more creative? And if so, what’s the secret of continued and future success?

The Eights: Eight for heaven
Here’s the Eight of Pentacles: perfectionism, ambition, and the earthly pursuit of a higher goal – perhaps a minor heaven-and-earth expression of the Magician. The Eight of Cups and Eight of Swords bring departure and decisions. I see the Eight of Cups’ departure as natural choice; there’s no drama in this leaving as it’s part of our life path, a re-alignment with who we need to become. The Eight of Swords is an invitation to release ourselves from restriction, to decide to be free. If we interpret ‘heaven’ as Higher Self, both cards appeal to us to listen to the Higher Self in order to be free. In the Eight of Wands we have eight dynamic wands flying heavenwards, bringing messages, signified by the raven on Game of Thrones Tarot. These three cards with a higher/heavenly interpretation might then ask us, ‘Are you listening?’

The Nines: Nine for hell
Call to mind the Nine of Cups, and it suggests benevolence and wishes granted rather than a hellish dungeon. Yet, of course, we create our own reality. Which begs the question: which reality are we creating? Even with this positive card, there’s a hint of the smugness we see in the Four of Pentacles. Are you fully aware what you’re manifesting? The Nine of Swords (little drum roll, if you please) is, of course, the hell of anxiety, and it’s created by our thoughts. Now for the Nine of Wands: the card of the psychic wound, the need for self-defence, vigilance and strength. If we see hell as enslavement, perhaps the Nine of Wands suggests self-torture. The Nine of Pentacles might be a gold mine, a place of extreme comfort: what we visualise when life is hell. And then, could this card be interpreted as a form of wish-fulfilment? Is there a plan that underpins the wish? And is this the real goal – material comfort?

The Tens: The Devil himself
Finally, the Tens. (I had to slurp a second cup of tea to get this far.) Following on neatly from the hell of the Nines, the last line of the magpie rhyme introduces the Devil himself. (In northern dialect, ‘sell’ means ‘self’.) If we see the Devil as a surfeit of ego, the Devil can be us, to the extreme. Which doesn’t feel comfortable when interpreting the Ten of Cups, naturally, with all its happiness and sense of completion, or the auspicious Ten of Pentacles. But, if we take it back to the Nines, hell is the shadow outcome depicted in the Ten of Swords. In the Ten of Wands, we have the burden, the accruing of work, responsibility, and the potential neglect of the self. Add the Devil to the cards’ traditional interpretations, and we might ask: ‘Where’s the temptation? Am I sabotaging myself here?’

If we related the ten lines of the rhyme to the major arcana, I’d align them as follows:

One for sorrow:  Justice, reversed

Two for joy:  The Star

Three for a wedding: The Empress

Four for a death/birth: The Hanged Man

Five for silver: The Moon

Six for gold: The Sun

Seven for a secret: The High Priestess

Eight for heaven: The Magician

Nine for hell: The Devil

Ten for the Devil’s own sell: The Chariot, reversed

Of course, the Magpie Rhyme is a moral tale. Being single is sorrowful, there’s joy in companionship, then the lovers are married, have a child (or the child dies in childbirth or later – children’s rhymes always have a dark side). The silver and gold represent accruing material wealth, then we move into the cosmic realm of the secret mysteries, heaven, and hell. With the devil ending the sequence, there’s excess – before it’s all stripped away and we begin again with the sorrowful One.

Thanks for reading, tarotistas.