Tarot on a Plate: The Deconstructed Reading 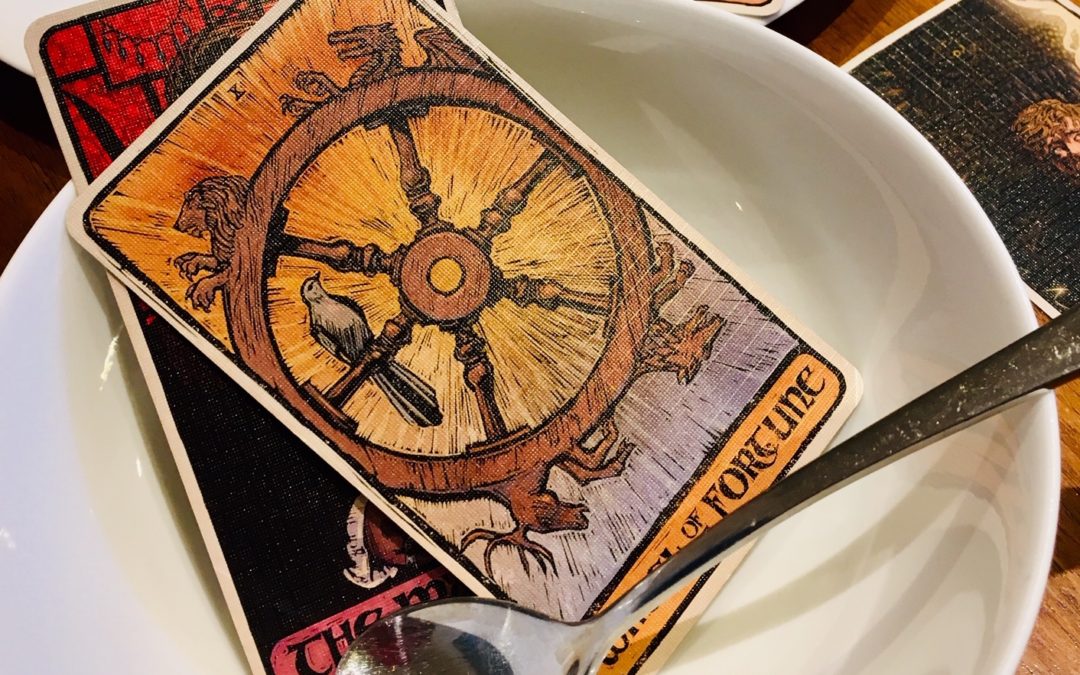 Tune in to Masterchef. There’s a pile of crumble, or ‘soil’. A neat dollop of fruit compote and, if you’re lucky, a side of custard in a teeny jug (read crème anglaise, if you will). A huge moon-white plate showcases each artful plonking. And as we know, plating in Masterchef is very important indeed, involved foam, some kind of piped gel, and micro herbs. I can say this with all the seriousness of a Gregg’s sausage roll.

And yet. As a foodie and tarotist, I’m seeing the process of reading as deconstruction: arranging a set of cards in a formation which suggests how a jumble of thoughts, experiences and aspirations might be temporarily separated and expressed in a way that makes sense. We’re rearranging the client’s crumble in one clean serving, looking at the fruity bits, the hard topping, the runny flow of existence. (Of course, I’m being free with my metaphors here, but that’s my job: to make connections, one card to the next, and ultimately delve into how tarot readings work – for us, as readers, and for the client.)

Deconstruction creates space. It shows up the gaps between ideas and creates definition through separation. And that’s a key aspect of divination: to walk into unknown spaces, to feel and to interpret what’s not immediately apparent. When we simplify, we see.

‘Imagine a spider web woven between two bushes – a web that shapes and defines what otherwise would have been an empty space. Now imagine that the web reveals the actual texture of the space in between – because these two are form the same thread, woven like cosmic strings, vibrating existence into being.’

Reading this quotation, I imagine a spread of tarot cards as the web, and the spaces between them the texture. A further image is writing a sentence in ink and lemon juice. The first and last words are in ink, and the words in between are written in juice. When we read cards, we’re holding the paper over a flame, seeing the hidden words, the mysteries, writing themselves onto the surface. They look different from the words recorded in ink: scorched, sepia, perhaps incomplete. Something substantial is emerging, which was always there, and now it’s appearing in the once-blank space in a sentence. In tarot, the cards in a spread create two things: a pattern of physical cards, and a pattern of space between them. As the physical cards hold energy, energy also exists in ‘negative’ space. (By the way, BETWEEN is the Switchword for activating clairvoyance, or clear-seeing – see my site www.switchwordspower.com).

Of course, we want to make sense of a reading, to bring every card’s meaning into a whole narrative that makes sense to us and to the reader. But if we’re focussed purely on this – making a linear story from a layout of cards in which there is only a beginning, middle and end with no pauses, no gaps – we can deny ourselves the space for insight. I’ll call this the ‘third space’, the realm of imagination, intuition, sensation. It’s that split-second gap in which intuitive ‘flashes’ happen; a disruption in the narrative in which truth raises its hand.

Client A wanted to know the outcome of a relationship issue – would she stay with her husband of twenty-two years? And with this direct question, she was giving me her power. I didn’t want it. Neither did I want to turn counsellor or advisor, turning the question back to her, saying, ‘What do you think? Do you want to leave this relationship?’. Instead, I offered her the elements, the life-fragments represented by each card. Unsurprisingly, one card was Death, at which she almost shouted, ‘That’s the end! It’s the end of the relationship.’ (We were at a wedding at the time, which made the reading rather poignant…) The next card was the Six of Cups. The client, who had some tarot experience, wanted to interpret this with Death as ‘And then he comes back!’ But what spoke to me in that moment was the gap – what lay between Death and the Six? Looking at each card without trying to make a story triggered an image. If felt as if the two figures on the Six, a man and woman, had no place in space or time. They were floating on a cloud by a fairy tale castle, disconnected from reality. There was no feeling of continuance after Death, despite the traditional meaning of reunion associated with the Six. I related these impressions without offering an answer to her question. It was for her to know and to experience. And taking that position in a reading can be difficult, because as readers we’re so judged on whether we get it ‘right’. I could have given her a straight prediction in a few minutes, but that space-in-between was telling me not to do so.

A year later, this client contacted me to say she and her husband had tried a relationship re-boot, and enjoyed six months of feeling they were back on track. But this didn’t last, and hadn’t feel real; they couldn’t recapture past happiness and so they separated – but had felt glad they had recommitted to working it out, giving their marriage one last try. They’re on good terms. She’s since moved on to a new partner.

As readers, it’s not for us to offer absolutes, or fix a problem, whatever that is. What we can do is present the cards and then be willing to walk into the spaces and pathways in between; to deconstruct that irresistible narrative that wants to shout out the beginning, the middle, the happy or unhappy ending without pausing for breath. To not have the whole crumble in one mouthful. And instead let those spaces, the gaps on the plate, speak.

It’s a tricky subject to write about, this third space in tarot. By nature it is indefinable. Putting it into words feels like trying to catch a dream just as you’re waking up: a slippery fish that won’t be landed. Think too much, grab too hard, and the dream-fish disappears. Immerse yourself in the stream and follow its glint, and there you are, in the third space without quite knowing how or why – which can be indescribably magical.