The Devil and Beyond 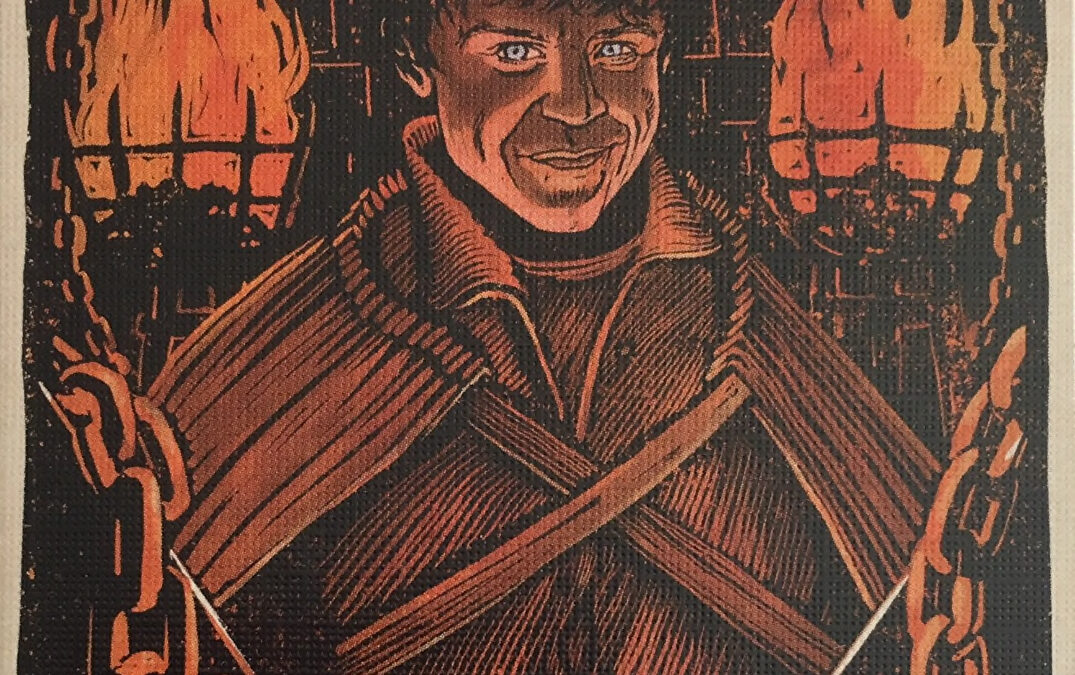 We know the drill: the Devil equals temptation, lust, affairs, addiction, abuse, debt, control issues, material entrapment; contracts with the self or with others, all of which are unfulfilling. In readings, it’s tempting to see the Devil’s enchantment as external, and we its little victims. But before I get into a lengthy diatribe on the moral aberrations of this most flagrant of cards, I’m intervening to say this: that the Devil also presents an opportunity to look closely at our conscious or unconscious choices. Unravel the god of excess, and we find unexpected gifts; a key to life-changing action. By understanding how we arrived at a Devil situation, we are better equipped to deal with him.

First, the doorways: these are the four minor arcana cards which lead toward the Devil’s Coming (I know this sounds rather hellfire, but interpret as you will). These are the Fives, which form part of the Devil’s number XV: the Five of Pentacles, Five of Cups, Five of Wands and Five of Swords. These are the tests and, given how we respond to them, they may be just the ticket to the Devil’s waiting room: trapped by ego (Wands), poverty (Pentacles), humiliation and shame (Swords) or loss (Cups). After all, the Devil plays on insecurities. In short, these Fives symbolize vulnerabilities that may lead us to give away our power.

Next, I wonder what leads us so completely into the lair, to go from a Five to a XV. Given he’s the shadow side of VI, the Lovers (the reduction of XV), I consider that the Devil may be the result of a decision delayed, a giving away of power. Poised between Temperance and the chaos of Tower, he surely represents the consequence of not fully owning ourselves or our decisions: that unsteady ground of over-compromise. If we do not act when prompted by the Lovers, a situation festers and is pushed down into the subconscious realm of fear, shame, and unrealised truths. This is the Devil’s domain, the base, material depths; yet it is also where our instinctual creative power resides, suppressed and hidden, waiting for early release.

Here’s one example of a Five and XV journey. Some years back I worked with the tarotist and author Kay Stopforth (Quantum Tarot, Universe Cards). Each month we’d get together to read, using her Hero’s Journey spread. The central card position represented our greatest current challenge. For more than two years of our six-year tarot meet-up, the Devil came up as my central card. And the Five of Wands, my very own doorway to the devil realm, would also appear so often it became a joke between us (Oh, not again, Liz… at which point I’d help myself to another tea cake). At some level, I saw my situation at work as simply an ongoing test, and given time I would work out the winning formula. My ego said my manager would change her personality if I kept trying to appease her. (This wasn’t about finances. The work was better paid than others at an equivalent level in other companies.) Only when I left the company I had been working for and the all-consuming boss did the Devil entirely disappear from the spread. Looking back, I ignored my early Lover’s card so long it flipped into its shadow.

This helped me reflect upon how the Devil can be a great teacher, a lesson we encounter over and again and which persists until we get the message; we’re never too aware, evolved nor clever not to need him. In a reading for yourself, he offers a great opportunity for focus, to see where most of your energy is going and how you’re being consumed – whether this is through giving away time, creativity, love, money. This idea of consumption brings to mind the fifteenth-century Visconti Sforza Tarot and a card that shows three figures being eaten by the Devil. It’s a grotesque image, dominated by a central human face who appears bewildered rather than agonised by his predicament. He’s half-eaten, yet unaware of what is going on. If we find ourselves in a Devil situation, it is not down to stupidity or bad motivation. The Devil creeps up on us. He’s not riding a horse and holding a banner that screams, ‘Hand over your soul!’ At first, he may make you feel good with a surface enticement. He may come to you as the Magician, disguised. The Hebrew letter associated with the Devil is Ayin. Its symbol is the eye, meaning ‘clear vision’. And that’s exactly what is needed – to recognize a potential devil situation before it consumes our energy, before we have agreed to our own enslavement.

In Game of Thrones Tarot, artist Craig Coss and I chose the psychopath Ramsay Bolton as the Devil, one of the most obvious pairings for us in the deck. Ramsay entices the Ironborn prince Theon Greyjoy by offering him freedom, but then betrays him, leading him right back to the dungeons of the Dreadfort, the seat of House Bolton. He has him castrated by henchmen, tortures him and forges a perverse intimacy based on psychological as well as physical abuse. Naming him Reek, Ramsay takes away Theon’s identity to the extent that when sister Yara attempts to rescue him with a fleet of Ironborn soldiers, he refuses because he believes her intervention is a trick; at this point in the story, he has been captive too long to reclaim himself. He cannot choose freedom, to take the Fool’s leap of faith. (In my forthcoming workshops in Perth, Melbourne and Sydney this May, I’ll be talking more about the thinking behind Game of Thrones tarot and the intersection of tarot the the mythic narratives of the series).

A consideration of the Devil takes work. Yet the truth, as they say, sets us free – and that freedom, that final decision that takes away the Ten-of-Wands weight, is ours to take: without our agreement, without our energy, he’s gone. In client readings, I often interpret the Devil then turn him face down. The whole energy in the reading shifts; it’s lighter, more fluid, and suddenly there is space for what’s to come.

This article first appeared in The Magician, the official publication of the Tarot Guild of Australia, 2020.