Making Magic with the Seven of Cups 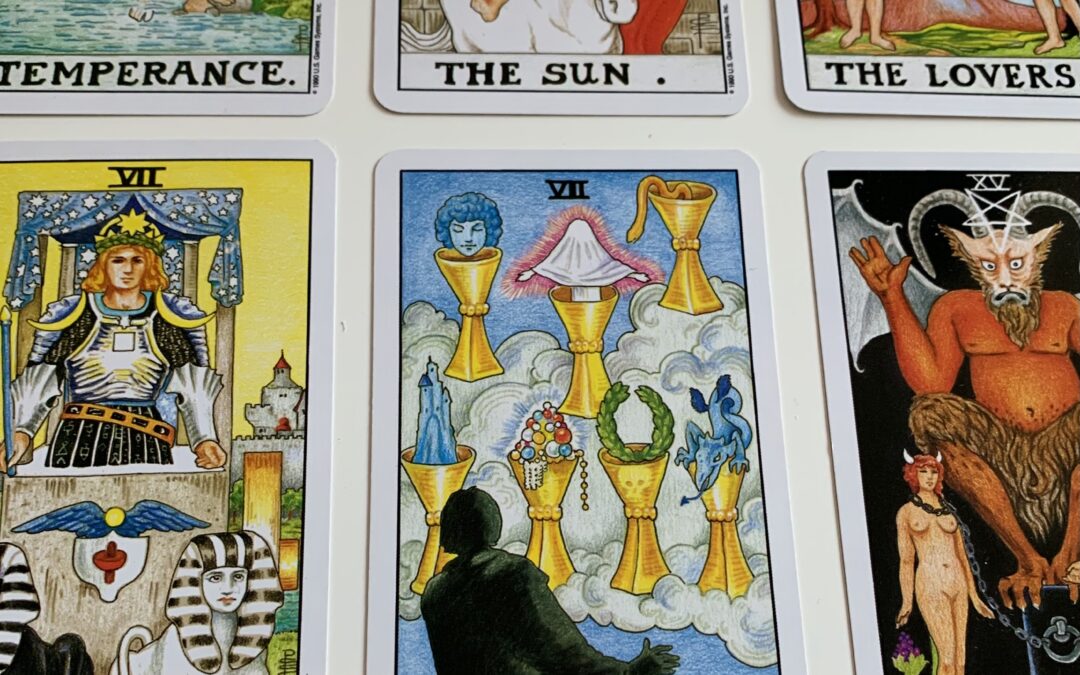 I do love this Seven: a mysterious figure conjuring seven chalices from a cloud. This, Tarotistas, is the card of fantasy, imagination, self-delusion and distraction. And the mystery man, seen only in silhouette, presents all manner of beguiling things – from a cupful of jewels and fantasy castle to a figure cloaked in a white cloth.  In fact, as a friend recently commented, the Seven of Cups is a bit like Instagram – everything’s up there for all to see, but you’re not too sure if it’s real.

We see the idea of hidden things and the unknown in the other Sevens, too (after all, Seven symbolises mysteries…):

Seven of Wands: The hidden opponents. Who is brandishing the wands? We see only the upper part – no hands or faces. The male figure can’t see what or whom is challenging him.

Seven of Swords: The sneaky thief. And the tents, too, symbolise things unknown; we can’t see their occupants. Again, like the Seven of Wands, there are signs of activity – but no physical bodies appears on the cards.

Seven of Pentacles: What’s hiding in the bushes? Are there more coins to come – or a hidden adversary?

In readings, the Seven of Cups card comes up frequently, particularly during our time of covid. Those I’ve read for over the past year have often said that this Seven illustrates their bewilderment. They need to do something – anything – to get a situation moving but the information is sketchy and the picture incomplete (looking at the Rider Waite Smith card, you’ll see that some of the cup’s symbols are in outline, and not coloured in). So, there are many possibilities. Are they real? And what should you do? In short, we need to land a cup, to focus on one thing and direct our energy there, rather than be distracted by all that glisters.

To take back personal power in this situation, we make a shift from the world of the hidden magician to the true Magician, card 1, who uses his resources to manifest what he wants. The Magician has his wand: we have our tarot cards.

Take your Seven of Cups and place it face up before you. From the list below, pull out the associated major arcana cards and place them around it, so you have the Seven of Cups in the centre and seven majors (one for each cup symbol). Here are the major cards that I’ve linked with the seven symbols:

So now you’ll have a selection of major arcana cards: The Sun (or Hanged Man), The Chariot, The Lovers, The Devil, The World, Death, The Empress and Temperance.

Shuffle them and ask:

What can I do to find direction?

How can I land this idea/job/project?

Choose one card. This is your guidance.

The main image shows cards from The Universal Waite, US Games Systems, Inc.