What’s with the Tarot Kings? 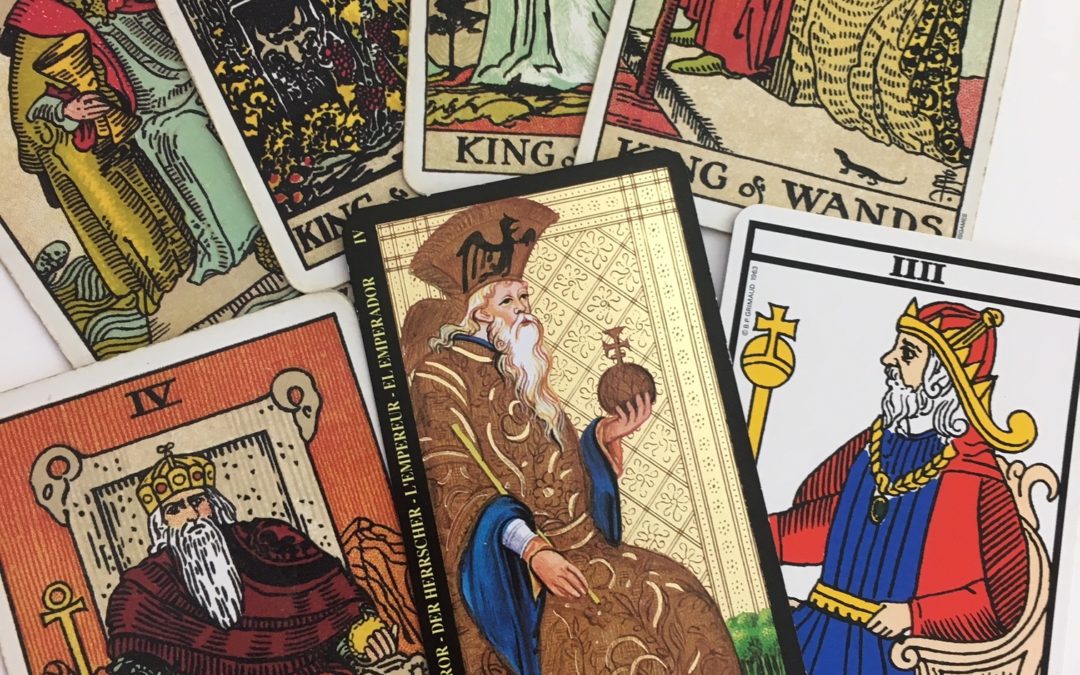 I love getting reader questions. Michael recently asked me about the elemental association of the tarot’s four Kings. (Each King takes the element of his rank and the element of his suit, which give us clues about his character.) Michael had been discussing my Ultimate Guide to Tarot
in his study group, and noticed that my association of Kings with the Air element contradicts the Golden Dawn teachings, in which Kings take the element of Fire. So, for example, the King of Swords would take Fire of the suit of Air (Swords) according to the the Golden Dawn, whereas, according to little old me, he’d be Air of Air.

Yes, I know I’ve broken with tradition. But here’s my thinking.

Kings as Air relate to the various associations between rank and suit. The Kings, as holders of wisdom and authority, align with the mind-oriented suit of Swords (Pages with Coins, dynamic Knights with Fire, Queens with Cups). Then there’s the medieval social hierarchy of the suit of Coins with merchants, Wands with peasants and other lower orders, Cups with the priesthood and Swords with noble warriors – the warrior aspect of the Kings.

If we look for the warrior in the Rider Waite Smith Kings, we see this in the King of Pentacles’ armour and of course the sword held aloft in the King of Swords. Then, if we consider that the four Kings are aspects of IV The Emperor, we see too that the Emperor wears battle-armour under his cloak: a representation of the ‘noble warrior’.

Staying with the Emperor as the essence of the four Kings (as The Empress is for the Queens), there’s another interesting correspondence here, too. On the RWS World are the bull, lion, man and eagle. These can be interpreted as symbols for the four suits (bull – Earth, Pentacles; lion – Fire, Wands; man – Water, Cups; eagle –Air, Swords). Take a look at the Visconti-Sforza tarots’ Emperor and we see the emblem of the eagle on his hat, signifying fatherhood and the eagle’s natural element of Air (and the eagle also appears on the Marseilles Emperor’s shield). So, the four Kings, as aspects of the Emperor, have been assigned Air in my book. (Naturally if we look at The Emperor’s element of Fire as assigned in the Golden Dawn system, one might equally argue that the Kings should take this element.) However, Air makes sense to me.

You might also wish to look at Tarot: The Open Reading, Yoav Ben-Dov, Kings as Air/Swords, p. 187; illustrated with the Marseilles (CreateSpace 2013); Tarot Mysteries, Jonathan Dee, alignment of Kings as Air (Zambesi Publishing, 2003).